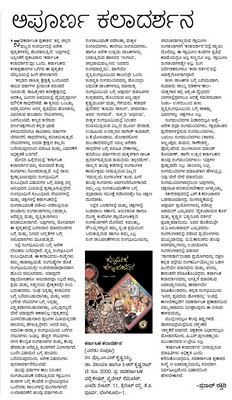 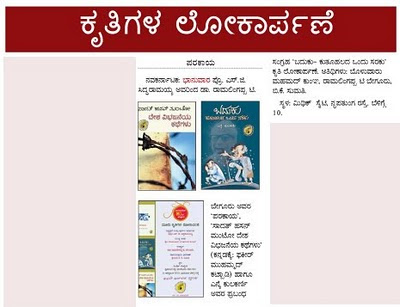 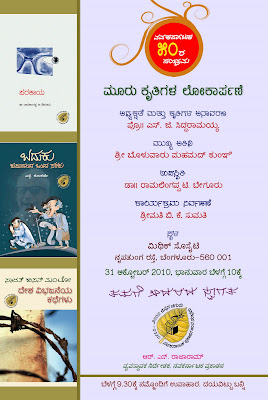 Posted by Navakarnataka at 1:20 PM No comments: 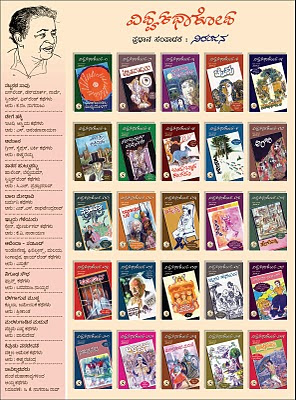 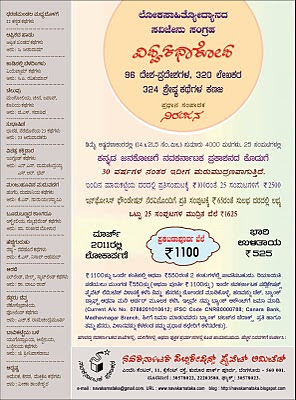 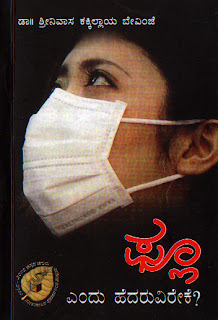 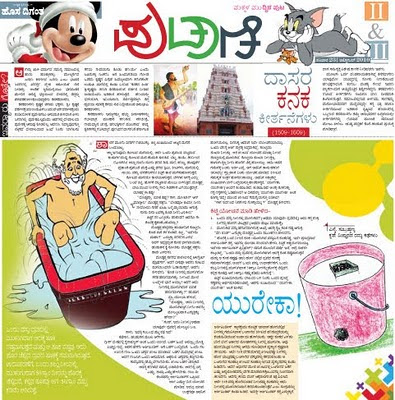 Science Story by N K Subrahmanya from NKP Books
Published in Hosadigantha 23 Oct 2010
Posted by Navakarnataka at 1:40 PM No comments: 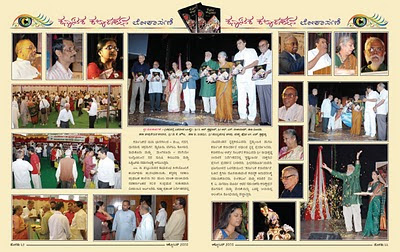 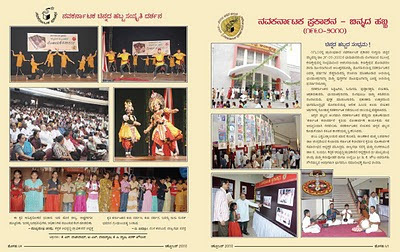 Karnataka Kaladarshana Book Launch Ceremony
A Report in Hosatu Monthly Oct. 2010
Posted by Navakarnataka at 7:37 AM No comments: 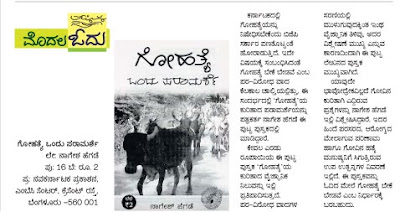 Cow Slaughter - A Review published in Prajavani Sapthahika 16 Oct 2010
Posted by Navakarnataka at 7:26 AM No comments:

The Sveriges Riksbank Prize in Economic Sciences in Memory of Alfred Nobel 2010 was awarded jointly to Peter A. Diamond, Dale T. Mortensen and Christopher A. Pissarides "for their analysis of markets with search frictions".

11 October 2010
The Royal Swedish Academy of Sciences has decided to award The Sveriges Riksbank Prize in Economic Sciences in Memory of Alfred Nobel for 2010 to
Peter A. Diamond
Massachusetts Institute of Technology, Cambridge, MA, USA,

Why are so many people unemployed at the same time that there are a large number of job openings? How can economic policy affect unemployment? This year's Laureates have developed a theory which can be used to answer these questions. This theory is also applicable to markets other than the labor market.
On many markets, buyers and sellers do not always make contact with one another immediately. This concerns, for example, employers who are looking for employees and workers who are trying to find jobs. Since the search process requires time and resources, it creates frictions in the market. On such search markets, the demands of some buyers will not be met, while some sellers cannot sell as much as they would wish. Simultaneously, there are both job vacancies and unemployment on the labor market.
This year's three Laureates have formulated a theoretical framework for search markets. Peter Diamond has analyzed the foundations of search markets. Dale Mortensen and Christopher Pissarides have expanded the theory and have applied it to the labor market. The Laureates' models help us understand the ways in which unemployment, job vacancies, and wages are affected by regulation and economic policy. This may refer to benefit levels in unemployment insurance or rules in regard to hiring and firing. One conclusion is that more generous unemployment benefits give rise to higher unemployment and longer search times.
Search theory has been applied to many other areas in addition to the labor market. This includes, in particular, the housing market. The number of homes for sale varies over time, as does the time it takes for a house to find a buyer and the parties to agree on the price. Search theory has also been used to study questions related to monetary theory, public economics, financial economics, regional economics, and family economics.

Peter A. Diamond, US citizen. Born 1940 in New York City, NY, USA. Ph.D. 1963, Institute Professor and Professor of Economics, all at Massachusetts Institute of Technology (MIT), Cambridge, MA, USA.
http://econ-www.mit.edu/faculty/pdiamond
Dale T. Mortensen, US citizen. Born 1939 in Enterprise, OR, USA. Ph.D. 1967 from Carnegie Mellon University, Pittsburgh, PA, USA. Ida C. Cook Professor of Economics at Northwestern University, Evanston, IL, USA.
http://faculty.wcas.northwestern.edu/~dtmort
Christopher A. Pissarides, British and Cypriot citizen. Born 1948 in Nicosia, Cyprus. Ph.D. 1973, Professor of Economics and Norman Sosnow Chair in Economics, all at London School of Economics and Political Science, UK.
http://personal.lse.ac.uk/pissarid
The Prize amount: SEK 10 million, to be shared equally between the Laureates.
Contact: Erik Huss, Press Officer and Editor, phone +46 8 673 95 44, +46 70 673 96 50, erik.huss@kva.se
The Royal Swedish Academy of Sciences, founded in 1739, is an independent organization whose overall objective is to promote the sciences and strengthen their influence in society. The Academy takes special responsibility for the natural sciences and mathematics, but endeavours to promote the exchange of ideas between various disciplines.

Scientific Background
http://nobelprize.org/nobel_prizes/economics/laureates/2010/sci.html
Posted by Navakarnataka at 9:12 PM No comments:

Residence at the time of the award: China

Prize motivation: "for his long and non-violent struggle for fundamental human rights in China"

The Nobel Peace Prize 2010 was awarded to Liu Xiaobo "for his long and non-violent struggle for fundamental human rights in China".

The Nobel Peace Prize for 2010

The Norwegian Nobel Committee has decided to award the Nobel Peace Prize for 2010 to Liu Xiaobo for his long and non-violent struggle for fundamental human rights in China. The Norwegian Nobel Committee has long believed that there is a close connection between human rights and peace. Such rights are a prerequisite for the "fraternity between nations" of which Alfred Nobel wrote in his will.

Over the past decades, China has achieved economic advances to which history can hardly show any equal. The country now has the world's second largest economy; hundreds of millions of people have been lifted out of poverty. Scope for political participation has also broadened.

China's new status must entail increased responsibility. China is in breach of several international agreements to which it is a signatory, as well as of its own provisions concerning political rights. Article 35 of China's constitution lays down that "Citizens of the People's Republic of China enjoy freedom of speech, of the press, of assembly, of association, of procession and of demonstration". In practice, these freedoms have proved to be distinctly curtailed for China's citizens.

For over two decades, Liu Xiaobo has been a strong spokesman for the application of fundamental human rights also in China. He took part in the Tiananmen protests in 1989; he was a leading author behind Charter 08, the manifesto of such rights in China which was published on the 60th anniversary of the United Nations' Universal Declaration of Human Rights, the 10th of December 2008. The following year, Liu was sentenced to eleven years in prison and two years' deprivation of political rights for “inciting subversion of state power". Liu has consistently maintained that the sentence violates both China's own constitution and fundamental human rights.

The campaign to establish universal human rights also in China is being waged by many Chinese, both in China itself and abroad. Through the severe punishment meted out to him, Liu has become the foremost symbol of this wide-ranging struggle for human rights in China.

Posted by Navakarnataka at 2:52 PM No comments:

Prize motivation: "for his cartography of structures of power and his trenchant images of the individual's resistance, revolt, and defeat"

The Nobel Prize in Literature 2010 was awarded to Mario Vargas Llosa "for his cartography of structures of power and his trenchant images of the individual's resistance, revolt, and defeat".

"for his cartography of structures of power and his trenchant images of the individual’s resistance, revolt, and defeat".

Mario Vargas Llosa was born on March 28, 1936 in Arequipa, Peru to Ernesto Vargas Maldonado and Dora Llosa Ureta. After his parents divorced, he grew up with his mother and grandfather in the city of Cochabamba in Bolivia. The family moved to Piura, Peru in 1946 where his grandfather held an appointment as a civil servant. His parents were reunited in 1947 and settled in Lima. Mario Vargas Llosa went to a Catholic school in Lima. Later his father sent him to the military school, Leoncio Prado. After graduating from Colegio Nacional San Miguel in Piura, Mario Vargas Llosa studied law and literature in Lima and Madrid. In 1955, he married Julia Urquidi. In 1959, he moved to Paris where he worked as a language teacher and as a journalist for Agence-France-Presse and the national television service of France. As an author, he had an international breakthrough with the novel La ciudad y los perros (1963; The Time of the Hero, 1966). This novel, which builds on experiences from Leoncio Prado, was considered controversial in his home land. A thousand copies were burnt publicly by officers from Leoncio Prado. In 1964 Mario Vargas Llosa divorced Julia Urquidi. The following year, he married his cousin, Patricia Llosa. After having lived alternately in Paris, Lima, London and Barcelona, he returned to Lima in 1974. In 1975 he was elected to the Peruvian Academy. He has lectured and taught at a number of universities in the USA, South America and Europe. In 1990 he ran for the Presidency representing the FREDEMO alliance in Peru, but lost the election. In 1994 he was elected to the Spanish Academy, where he took his seat in 1996. In recent years he has lived in Barcelona, Madrid, Lima, Paris and London. His well known works include Conversación en la catedral (1969; Conversation in the Cathedral, 1975), La guerra del fin del mundo (1981; The War of the End of the World, 1984) and La fiesta del chivo (2000; The Feast of the Goat, 2001). He is also a noted journalist and essayist.

Posted by Navakarnataka at 8:55 PM No comments:

The Nobel Prize in Chemistry 2010

Great art in a test tube

Organic chemistry has developed into an art form where scientists produce marvelous chemical creations in their test tubes. Mankind benefits from this in the form of medicines, ever-more precise electronics and advanced technological materials. The Nobel Prize in Chemistry 2010 awards one of the most sophisticated tools available to chemists today.

This year's Nobel Prize in Chemistry is awarded to Richard F. Heck, Ei-ichi Negishi and Akira Suzuki for the development of palladium-catalyzed cross coupling. This chemical tool has vastly improved the possibilities for chemists to create sophisticated chemicals, for example carbon-based molecules as complex as those created by nature itself.

Carbon-based (organic) chemistry is the basis of life and is responsible for numerous fascinating natural phenomena: colour in flowers, snake poison and bacteria killing substances such as penicillin. Organic chemistry has allowed man to build on nature's chemistry; making use of carbon’s ability to provide a stable skeleton for functional molecules. This has given mankind new medicines and revolutionary materials such as plastics.

In order to create these complex chemicals, chemists need to be able to join carbon atoms together. However, carbon is stable and carbon atoms do not easily react with one another. The first methods used by chemists to bind carbon atoms together were therefore based upon various techniques for rendering carbon more reactive. Such methods worked when creating simple molecules, but when synthesizing more complex molecules chemists ended up with too many unwanted by-products in their test tubes.

Palladium-catalyzed cross coupling solved that problem and provided chemists with a more precise and efficient tool to work with. In the Heck reaction, Negishi reaction and Suzuki reaction, carbon atoms meet on a palladium atom, whereupon their proximity to one another kick-starts the chemical reaction.

Palladium-catalyzed cross coupling is used in research worldwide, as well as in the commercial production of for example pharmaceuticals and molecules used in the electronics industry.

Information for the Public
Pdf 1 Mb

Posted by Navakarnataka at 9:42 PM No comments: