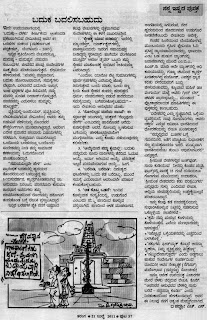 Baduku Badalisabahudu
A collection of Articles by Nemichandra
Posted by Navakarnataka at 11:36 AM No comments: 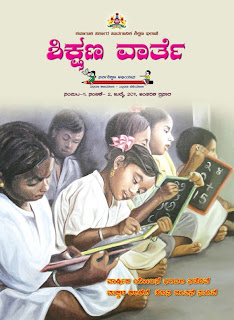 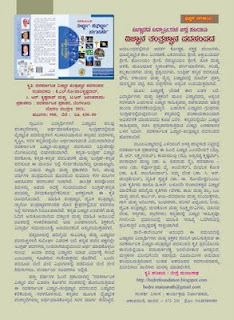 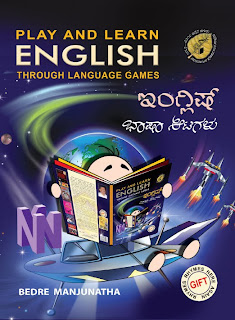 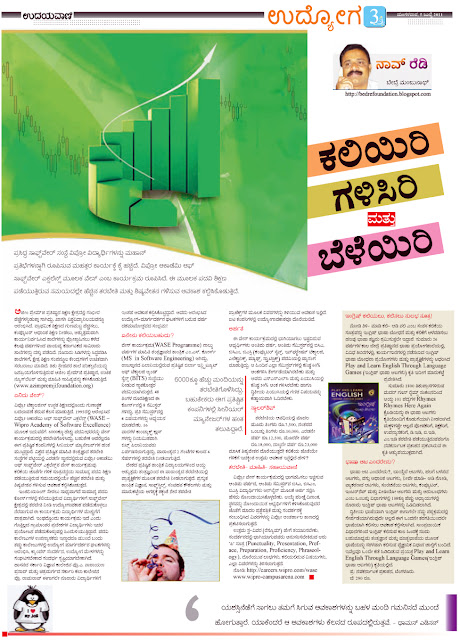 Play and Learn English through Language Games
Latest book by Bedre Manjunath
Article in Udayavani - Josh 05 July 2011
Posted by Navakarnataka at 9:35 AM No comments:

Kusuma Shanbhag's “Manninda Eddavaru” is a novel, that in quite a remarkable manner, portrays the existential predicament of a woman, Kaveri. However, through Kaveri's conflicts, anxieties and, more importantly, indomitable will, the work foregrounds the plight of women caught in a feudal patriarchal order where the male, both in his active and utterly passive states, attempts to negate the very being of women even though he unhesitatingly uses the woman to fulfil all his needs.

The manner in which Kusuma Shanbhag weaves the story of Kaveri and constructs the life of an entire community in a very simple, but arresting way is truly commendable. The entire narration, totally devoid of rhetorical flourishes, is simple, direct, immediate and opens up a world not very familiar to urban readers. But the immediacy of experience that comes through the rich details of the characters the work portrays, dissolves all barriers the reader may carry because of her/his own different location in terms of space and time.

“Manninda Eddavaru” revolves round a small agrarian community fairly removed from the modernised urban centres, especially as regards the attitudes and values it carries. What is truly extraordinary about the novel is that its scheme of narration never, ever, slips into a terrain where the situations and the characters depicted emerge as ideological constructions of the author. At the very centre of its feudal world we behold women of exceptional strength and character who, in different ways, come to terms with the nature of their lives, though, of course, not all of them confront and defy the patriarchal order as the protagonist Kaveri does, and so very triumphantly.

The stories of Subbamma, Savitri, Seetha, Janaki, Shylaja and Kaveri are actually fine images of the different physical and emotional realities of women which eventually integrate to evolve as metaphors for women's lives. Women of the older generation like Subbamma and Janaki are deeply aware of the injustice they have to put up with even though they are not in a position to protest. It is the younger generation that stands up to resist the tyranny of the unjust and unethical ways of men. While doing so they do not mind breaking feudal family ties, and rules of the caste system. Kaveri is deprived of education, and is even forced to remain unmarried for she has to slave for the well being of the family and her brother. It is this insensitive and brutal will of the male that Kaveri fights fearlessly and even goes to a court of law against her father and brother to get justice. The refusal to get tied down to a decadent conservative male order propels an upper caste girl like Seetha to fall in love and elope with Kechu, a labourer from the lower caste, unmindful of the consequences. The fervent, but helpless, pleas of Subbamma and Janaki, as house bound women, do reflect the presence of a sense of justice and equality even in women steeped in the traditional order. Kusuma Shanbhag takes us into the inner cosmos of women without adversely affecting the experiential realm of women, which as a woman novelist, she is in fact deeply preoccupied with. This is the major strength of “Manninda Eddavaru”.

The other crucial dimension of the novel is that it does not parade defiant women as totally successful and victorious. Seetha becomes self destructive as her life with Kechu develops independent of traditional values. Kaveri, for all her defiance, blunders while choosing the utterly cunning Narayana for a husband. In spite of all these the women do not perish in body and spirit. Kaveri looks forward to a future with a pathetically abandoned child to nurse and care for. “Manninda Eddavaru” is about those women who daringly rise from the dust they have been pushed into by a desensitised social order with no elementary understanding of its own rottenness.

Thank You Professor and Editor of The Hindu

Posted by Navakarnataka at 9:04 AM No comments: English Language Games - New Arrival
Posted by Navakarnataka at 9:03 AM No comments: