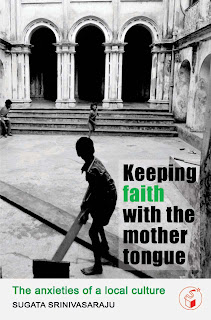 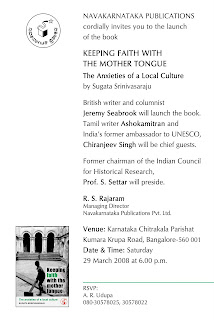 This is a book of essays that explores the anxieties of a local language and its culture. The book's point of reference is the Kannada language and Karnataka but it resonates the crisis being faced by hundreds of regional tongues and cultures across the globe. The book presumes that the diffidence, desperation and a sense of defeat in the speakers of non-English tongues are similar to that of the speakers of the Kannada language.

The book does not confine itself to literature to make its point on the crisis, but also probes the different dimensions of the conflict - economic, political, moral and aesthetic. Therefore, in the book, anxiety about the clipped and compromised existence of the Kannada language is spoken of in the same breath as the death of a river or the effort of corporate houses to grab land. The aspect of identity forms a backdrop to the entire book and it is argued that identity is conceived on the tripod of land, water and language. Hence, losing them in whatever measure tantamounts to losing identity.

The book also deals with the issue of cosmopolitanism versus chauvinism. An issue that has disturbed our peace in the recent past. In the everyday sense, cosmopolitanism is largely associated with the use of English language and the 'benign' global environments it is said to 'naturally' create. This is often contrasted with the milieu generated by local languages and cultures, which are hastily and unfairly dubbed as 'provincial' and 'parochial.' Ordinarily, all celebrations of cosmopolitanism are about shedding the cultural self and specifics and merging oneself with an amorphous techno-global identity. The book challenges this view. There are a total of 46 essays in the book under five different sections.

Sugata Srinivasaraju is a senior journalist with Outlook, the national newsmagazine. He had earlier worked for the Deccan Herald and Hindustan Times and had also contributed to the Irish Times. At 26, Sugata was also the youngest editor of Aniketana, the English literary journal published by the Karnataka Sahitya Academy. His earlier publications include Ekushey February, an edited volume in Kannada on mother tongues and Phoenix and Four Other Mime Plays, translation of mime plays from the Emergency years in India. He was awarded the British Chevening Scholarship in 2000 and the Karnataka Sahitya Academy Prize for literary translation in 2005.

The book is being published by Navakarnataka Publications, one of Karnataka’s biggest and most respected publishing houses. Navakarnataka was recently conferred the ‘Best Publisher’ award by the Kannada Book Authority. They have served the reading public for close to 50 years and have published nearly 2500 progressive titles mostly in Kannada. They have occasionally published English titles and that includes the eight volume Global Philosophy for Everyman series under the editorship of renowned philosopher Debiprasad Chattopadhyaya. A number of important Indian writers like Bhisham Sahni have been published in translation by the publishing house. Navakarnataka also publishes a monthly magazine in Kannada called Hosathu.

Ramachandra Guha, Historian and Columnist:
In this stimulating book, Sugata Srinivasaraju explores the clash between local cultures on the one hand and the homogenizing impulses of globalisation on the other... his sweep is broad, his tone by turns empathetic and polemical. He acquaints us with the different dimensions of this conflict - economic, political, moral and aesthetic. Through his reports and analyses, Sugata makes a case for a rooted cosmopolitanism that I for one found deeply persuasive.”

Ashokamitran, Tamil writer:
Spanning across centuries from the earliest extant Kannada literary work of the 850 to today's Lankesh and Karnad and unblurred focus on the invisible and visible expressions of the cultural consciousness of the great Kannada community, the book is an exemplary discourse of an extremely well-informed, reflective, liberal and committed mind. Though the author's reference point is Kannada, his concerns are the concerns of all languages of India.
The book contains some perceptive biographical pieces which are moving, original observations of those personalities. Sugata Srinivasaraju's scholarship and his natural restraint makes the book one of the most illuminating and stimulating commentaries on contemporary Indian society.

Jeremy Seabrook, British Writer and Columnist:
This book is grounded in a precise locality and a particular culture. This gives it great resonance for people all over the world, the bearers of ‘minor’ or ‘limited’ languages, who see the recuperation of their identity as bound up in the survival of the language and tradition, which formed them. It deserves to be read wherever cultures are threatened; and that means everywhere; and also in translation, not least in the Kannada of which Sugata is such a powerful and loving advocate... Sugata is indeed an exceptional ambassador between cultures.

Posted by Navakarnataka at 1:24 PM