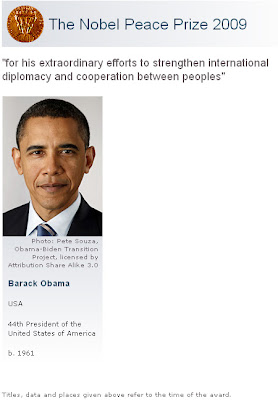 The Nobel Peace Prize for 2009

The Norwegian Nobel Committee has decided that the Nobel Peace Prize for 2009 is to be awarded to President Barack Obama for his extraordinary efforts to strengthen international diplomacy and cooperation between peoples. The Committee has attached special importance to Obama's vision of and work for a world without nuclear weapons.

Obama has as President created a new climate in international politics. Multilateral diplomacy has regained a central position, with emphasis on the role that the United Nations and other international institutions can play. Dialogue and negotiations are preferred as instruments for resolving even the most difficult international conflicts. The vision of a world free from nuclear arms has powerfully stimulated disarmament and arms control negotiations. Thanks to Obama's initiative, the USA is now playing a more constructive role in meeting the great climatic challenges the world is confronting. Democracy and human rights are to be strengthened.

Only very rarely has a person to the same extent as Obama captured the world's attention and given its people hope for a better future. His diplomacy is founded in the concept that those who are to lead the world must do so on the basis of values and attitudes that are shared by the majority of the world's population.

For 108 years, the Norwegian Nobel Committee has sought to stimulate precisely that international policy and those attitudes for which Obama is now the world's leading spokesman. The Committee endorses Obama's appeal that "Now is the time for all of us to take our share of responsibility for a global response to global challenges."

Executive Office of the President

Barack H. Obama is the 44th President of the United States.

His story is the American story — values from the heartland, a middle-class upbringing in a strong family, hard work and education as the means of getting ahead, and the conviction that a life so blessed should be lived in service to others.

With a father from Kenya and a mother from Kansas, President Obama was born in Hawaii on August 4, 1961. He was raised with help from his grandfather, who served in Patton's army, and his grandmother, who worked her way up from the secretarial pool to middle management at a bank.

After working his way through college with the help of scholarships and student loans, President Obama moved to Chicago, where he worked with a group of churches to help rebuild communities devastated by the closure of local steel plants.

He went on to attend law school, where he became the first African—American president of the Harvard Law Review. Upon graduation, he returned to Chicago to help lead a voter registration drive, teach constitutional law at the University of Chicago, and remain active in his community.

President Obama's years of public service are based around his unwavering belief in the ability to unite people around a politics of purpose. In the Illinois State Senate, he passed the first major ethics reform in 25 years, cut taxes for working families, and expanded health care for children and their parents. As a United States Senator, he reached across the aisle to pass groundbreaking lobbying reform, lock up the world's most dangerous weapons, and bring transparency to government by putting federal spending online. 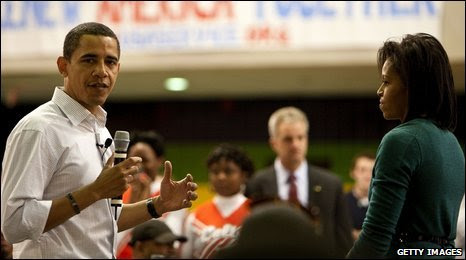 Barack Obama made history on 4 November 2008 when he easily defeated Republican rival John McCain to become the first black president of the United States.

He had already broken new ground in his White House campaign, as the first black candidate to become the presidential choice of either major US party.

His stirring oratory, combined with an easy charm, won him supporters in the US and admirers across the globe.

Critics, however, have started to question whether there is much substance behind his well-crafted statements of good intent.

Domestically, his first year in office has thus far been dominated by his attempts to reform US healthcare amid fierce opposition.

Internationally, much of his focus has been on attempts to achieve new agreements on nuclear disarmament and climate change, with his efforts in these areas yet to bear fruit.

And while there has been some progress on disengagement from Iraq, with US troops withdrawing to their bases as the Iraqi army grows in strength, the military headache of Afghanistan has been growing.

Mr Obama first came to national prominence when he electrified the 2004 Democratic National Convention in a speech about self-reliance and high aspiration.

The son of a Kenyan man and a white woman from Kansas, he emphasised his personal history in a speech reflecting traditional American ideals.

"Through hard work and perseverance my father got a scholarship to study in a magical place - America, which stood as a beacon of freedom and opportunity to so many who had come before," he said.

After his landslide US Senate election victory in Illinois a few months later, he became a media darling and one of the most visible figures in Washington, with two best-selling books to his name.

Mr Obama is named after his father, who grew up in Kenya herding goats but gained a scholarship to study in Hawaii.

There the Kenyan met and married Mr Obama's mother, Ann, who was living in Honolulu with her parents.

When Mr Obama was a toddler, his father got a chance to study at Harvard but there was no money for the family to go with him. He later returned to Kenya alone, where he worked as a government economist, and the couple divorced.

When Mr Obama was six, his mother married an Indonesian man and the family moved to Jakarta.

Although his father and step-father were Muslim, Mr Obama is a Christian and attended secular and Catholic schools during the four years he lived in Indonesia, a largely Muslim country.

He then moved back to Hawaii to live with his grandparents and attend school.

Mr Obama went on to study political science at Columbia University in New York, and then moved to Chicago where he spent three years as a community organiser.

In 1988 he left to attend Harvard Law School, where he became the first African-American president of the Harvard Law Review.

During the summer vacations from Harvard, Mr Obama returned to Chicago and served internships with law firms.

It was during one such internship that he met the then Michelle Robinson, whom he went on to marry in 1992. The couple have two young daughters, Malia and Sasha.

He served in the Illinois state senate from 1996 to 2004, before winning a seat in the US Senate.

On Capitol Hill, Mr Obama established a firmly liberal voting record, but also worked with Republican colleagues on issues such as HIV/Aids-education and prevention.

An early critic of the Iraq war, he spoke out against the prospect of war several months before the March 2003 invasion.

The senator attended the Trinity United Church of Christ in Chicago for almost two decades but broke away from it in May 2008 after controversial sermons by Trinity preachers hit the headlines.

To many people, Mr Obama seemed to come from nowhere in his bid for the presidency. Although he had served in the Illinois state senate for eight years, it was only in 2004 that he shot to national prominence, with the speech that stirred the Democratic National Convention.

And it was only in the two years leading up to the election that his name, face and story became known beyond America.

The senator clinched the Democratic nomination after a long and gruelling battle against former first lady Hillary Clinton.

In the course of campaigning, Senator Obama broke all records for fundraising, by harnessing the internet to collect huge numbers of small donations, as well as larger sums from corporate donors.

He also demonstrated the ability to gather crowds of 100,000 people or more to his rallies, and to generate a buzz seldom seen in US politics.