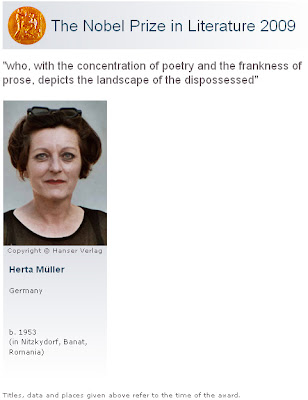 The Nobel Prize in Literature 2009

Herta Müller was born on August 17, 1953 in the German-speaking town Nitzkydorf in Banat, Romania. Her parents were members of the German-speaking minority in Romania. Her father had served in the Waffen SS during World War II. Many German Romanians were deported to the Soviet Union in 1945, including Müller's mother who spent five years in a work camp in present-day Ukraine. Many years later, in Atemschaukel (2009), Müller was to depict the exile of the German Romanians in the Soviet Union. From 1973 to 1976, Müller studied German and Romanian literature at the university in Timişoara (Temeswar). During this period, she was associated with Aktionsgruppe Banat, a circle of young German-speaking authors who, in opposition to Ceauşescu’s dictatorship, sought freedom of speech. After completing her studies, she worked as a translator at a machine factory from 1977 to 1979. She was dismissed when she refused to be an informant for the secret police. After her dismissal, she was harassed by Securitate.

Müller made her debut with the collection of short stories Niederungen (1982), which was censored in Romania. Two years later, she published the uncensored version in Germany and, in the same year, Drückender Tango in Romania. In these two works, Müller depicts life in a small, German-speaking village and the corruption, intolerance and repression to be found there. The Romanian national press was very critical of these works while, outside of Romania, the German press received them very positively. Because Müller had publicly criticized the dictatorship in Romania, she was prohibited from publishing in her own country. In 1987, Müller emigrated together with her husband, author Richard Wagner.

The novels Der Fuchs war damals schon der Jäger (1992), Herztier (1994; The Land of Green Plums, 1996) and Heute wär ich mir lieber nicht begegnet (1997; The Appointment, 2001) give, with chiselled details, a portrait of daily life in a stagnated dictatorship. Müller has given guest lectures at universities, colleges and other venues in Paderborn, Warwick, Hamburg, Swansea, Gainsville (Florida), Kassel, Göttingen, Tübingen and Zürich among other places. She lives in Berlin. Since 1995 she has served as a member of Deutsche Akademie für Sprache und Dichtung, in Darmstadt.

Posted by Navakarnataka at 5:17 PM

Email ThisBlogThis!Share to TwitterShare to FacebookShare to Pinterest
Labels: Nobel Prize for Literature 2009